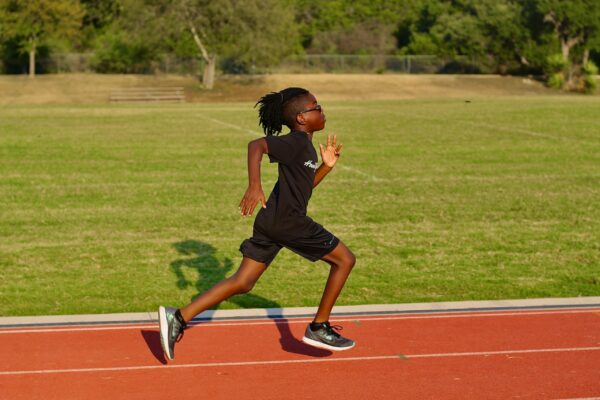 Running economy is dependent on many factors including strength, mobility and flexibility of the involved muscles and joints, narrow calves, narrow hips and longer training experience. Many factors can improve through training. As mentioned running economy has greater relevance and importance the longer you run. In a marathon race, it is therefore very important.

A good physiological running economy is among others the ability to use a large percentage of the maximum Oxygen uptake as possible over a long time, so you can run very close to your maximum Oxygen uptake, without lactate accumulating in the muscles. Several practical factors are contributing to the most effective and energy-saving run.

The Practical Factors in Running Economy

should be relaxed and freely. Try to avoid unnecessary and excessive movements. The upper body holds upright. Many people run exaggerated and bent forward but it really costs energy. Well-trained abdominal and back muscles make it easier to run upright and relax in the upper body.

This is one of the most significant. The more you increase the step length the more energy is wasted. The step length should be as short as your training runs at a relaxed pace. Long and jumping steps will cost a lot of energy because they recruit larger groups of muscle fibers, which hereby requires even more oxygen and fuel.

The whole body should only move a few centimeters up and down for each step, otherwise, you waste too much energy on an unnecessary hard fight against gravity.

Has to be relatively high. For most of us, it is close to three steps per second. Short quick steps are the most economical. Step frequency can control with your arms. If you move your arms a bit faster, the legs will follow automatically.

It may be useful to experiment with this during training. It also has to feel right but, in the beginning, it might feel a little unnatural to run with faster steps but over time, it becomes a habit and you get a more effortless, economic running style.

Are primarily intended to counteract the wrench of the hip, which naturally occurs when you set-off with the foot from the middle below the body and to create balance. Your arms should be moved relaxed close along the body, so the hand passes close by the hipbone and the forearm close to the ribs.

The angle between the forearm and upper arm should be around 90 degrees. The arm moves a little in front of the body when the opposite leg moves forward but it is generally more economical if the arm does not cross the body’s centerline.

has also significance for the running economy. The heavier you are, the more energy your muscles have to use to move your weight 42 km. We lose some kilo during marathon training, even if you already are slim. However, do not combine a strict diet with marathon training, since the training already requires considerable resources of your body.

This factor is probably the most crucial factor for a good running economy. Muscles developed through varied training in hills and by tempo runs, fatigue later. It’s an advantage to have a large surplus concerning individual muscle tension. For the resilient calf muscle, each step in the marathon race will be an insignificant task, thus the total energy becomes smaller.

Concerning long-distance race, strong muscles are not the same as large muscles, as you remember from earlier it will give longer transport for the oxygen to the muscle cell. If you look at the elite marathon runners, they more have muscles as guitar strings, but those sinewy muscles move them anyway about 6 meters forward per second.

If you e.g. are spectator by one of the big city marathons, you are close to the runners. Try to observe the leading runners as they pass, you will see that they move with an impressive speed, ease and elegance and they do it all the way to the finish line. It looks like they have never done anything else.

It looks somewhat different when the last runners pass you. They run with a heavy running style on flat feet and have difficulty by simply moving the legs and feet forward.

They have lower efficiency and a lot of energy is wasted. It seems difficult and hard, which can be seen in their attitude and facial expression too. In return, Most of them show an impressive fighting spirit and determination by continuing until they have accomplished their goal of reaching the finish line, and they work for the case more than twice as long out on the route than the leading runners, who come across the finish line in an easy running style.

Other Factors in Running Economy

A good running economy is also determined by factors such as running experience, long legs relative to body size and great mobility in the joints. The amount of accumulated years of running seems to have the greatest influence on improvements in the running economy. The running technique is also a significant reason for the differences in running economy if we compare joggers and elite runners.

If you are interested in Running Economy – Improve your run like myself, I hope you like this page and if you have any questions about the topic or want to leave your own Personal review, please leave a comment below.