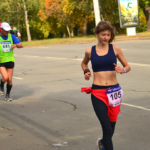 For many years, women have been discriminated against in sports and therefore also within running. Up to 1960, 800M was the longest international distance for women and in 1984 Marathon race for women got on the Olympic program. How to run for women – The excellent way is about women and running today since it really has evolved over the years. In 2018, 50.24 percent of all runners participating in races in the world were women.

Iceland is number one with 59 percent women, the United States is second with 58 percent women and then Canada with 57 percent (from “The State of Running 2019”). There are some facts about the woman’s anatomy and physiology who deserve awareness:

1. Physiology in How to Run

Women’s physiology differs in some points from men’s, the difference is not bigger than men and women today follow the same basic training principles. Men run faster than women because on average they are higher and stronger than women of equal weight.

Women also have more passive weight, since the amount of fat is significantly greater in women compared to men of the same size, which again means that a woman and a man of equal weight, do not have the same amount of muscle mass. This is one of the explanations that men run faster than women at all distances from the 100m to the marathon race.

2. How to Run the Safe Way – Menstruation and its Importance for Performance

Georgie Bruinvels is an MPhil / Ph.D. student at UCL who also works as a scientist at St Mary’s University in London. She has studied the effects of the menstrual cycle on the performance of female athletes. She is also a long-distance runner and came on the front page in 2015 when she won the Manchester Marathon. One of her studies has taken a closer look at how low iron levels can impact a woman’s athletic performance and training.

The iron level is constantly changing during the women’s menstrual cycle and more than half of female athletes who were asked in the research feel that their training and performance are affected by their cycle. The research gives a better knowledge of the problems, what happens in the body during the menstrual cycle, the different treatment options and what women can do to restore both their iron- and performance levels according to Georgie Bruinvels.

The good news is that it applies not only to the world’s top female athletes but also to you as a woman. Georgie discovered that there are plenty of things that you can do, so you can continue with your training effectively and effortlessly every month and some of the phases in your menstrual cycle actually improve your performance. The study has confirmed, that exercise in all the phases of the menstrual cycle is not only safe, it also contributes to reducing pain and discomfort. Learn more on this site.

3. How to Run and Hormone Balance

With easy to moderate running 2-3 times a week, hormonal disorders rarely occur. But intensive exercises tend to affect female sex hormones so much that some women suffer from menstrual disorders. Menstrual debut delays in girls/women who exercise compared to women who do not practice any type of exercise/sport. The more intensive training, the more the menstrual debut seems to be delayed. Intensive running can sometimes lead to menstrual irregularities.

The natural swings in the woman’s sex hormones become smaller. The Concentrations of estrogen and progesterone are reduced throughout the cycle. These disorders lead to few and irregular periods or completely missed periods. But often it doesn’t bother many female athletes and their leaders that menstruation is missed. Some sportswomen even see it as an advantage that they are not bothered by the recurring bleeding.

This occurs for some women. The condition is due to the pelvic ligaments being softened- and flexed so much during pregnancy that, for some while in motion, it becomes difficult to stabilize the pelvis with their muscles. This causes strain pain in the pelvis. Most experts agree that exercise is one of the best pelvic relief preventive activities.

Although there is no guarantee, you can try to replace running with walking, swimming, fitness bike/Elliptical trainer or running in water. If you already suffer from Pelvic joint pain, you should stop all kinds of physical exertion. Almost 100% of all women who suffer from pelvic pain during pregnancy get rid of the problem after childbirth.

5. How to Run During and After Pregnancy

If you are pregnant, there are some good tips to follow if you want to continue running during pregnancy. You can continue running if you already did it before you became pregnant but be aware of your body signals and stop if it becomes uncomfortable. Use your common sense and do not expose yourself to extreme exertion and avoid running in hot weather. It’s particularly important to an awareness of body temperature because if your temperature exceeds 38.3 degrees C, the risk of birth defects increases.

Keep an eye on temperature if you increase the amount of training. By great efforts, the blood is directed into the hard-working muscles and away from the child but nobody knows exactly how small the blood flow to the womb has to be before the womb enters an oxygen deficit.

Maybe this claim belongs to one of the myths about training in pregnancy but to be sure, you should decrease the training during pregnancy. Run so it feels comfortable and stops as soon as you notice any tendencies to cramps or you start gasping for breath. End your run with a gradual reduction to walk, since the blood doesn’t flow so quickly back to the womb if you stop abruptly. After giving birth, it is important to start getting the pelvic floor trained.

Particular about the training of abdominal muscles as they are important stabilizers of the spine. In particular, in the last third of pregnancy, they have been very much loaded and stretched. You can start running again after about 4 – 6 weeks. Be careful at the beginning and if the training causes the discomfort of any kind, you should postpone your startup for a few weeks. The child may well be with you in the training since there are baby joggers on the market today.

I hope you like this review and if you have any questions about this topic or want to leave your own Personal review, please leave a comment below.

4 thoughts on “How To Run For Women – The Excellent Way”