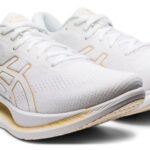 The shoe is different from what we are used to from Asics because it is very noticeable that the shoe’s outsole is not classic. It is extremely curved at the forefoot. The banana-shaped design of the stiff sole of the shoe caused us all to stop and take a proper look. But Asics has a purpose with this. The shoe is designed to give you a more efficient run so you can run longer without using more energy.

Due to the design of the shoe, there is not much movement in the ankle joint during the standing phase, and this means that the muscles in the lower leg do not have to work quite as hard, which saves energy. So, you can run longer and faster without feeling it harder.

Next is the “high sole” which makes the Asics GlideRide look like a midsole that we know from the Hoka One One shoes or certain Nike series such as the Nike Zoom Fly. It’s like a softer, more stable version of the Zoom Fly with a comfortable upper.

If you see the pictures of the shoe, then you can see how curved a forefoot the shoe has. It makes a steep bend upwards. The sole is, as I said, Asics’ answer to creating a running shoe that uses less energy in the long runs. The changed angle – the bend – in the forefoot of the sole is thus an essential part of the shoe’s technology because you become more driven to run forward.

This feature is also part of the fact that you will not be disappointed if the shoe is not as soft as it looks. Because in a combination, these 2 factors are really conducive. They compromise each other really well, and probably make the most complete midsole, seen from Asics, for many years.

The shoe is basically designed with a fit for the neutral runner, which means there is no pronation support on the inside of the shoe. But even if there is no direct support, the midsole is very stable due to its composition of Gel and not least FlyteFoam.

Under the foot, there are two layers of foam. At the bottom is the soft and resilient FlyteFoam Propel and at the top is the lighter and slightly firmer FlyteFoam. In addition, a GEL cushion is wedged under the heel – for extra shock absorption. And then there is a relatively rigid plate in the middle and front part of the shoe, which makes the forefoot quite stiff and helps to preserve this very curved design.

Asics GlideRide is a relatively wide running shoe that has a good fit on the feet. However, it is very individual, and if you have a narrow foot, then it may well be that Asics Glideride is not a good choice for you.

It is designed for quantity training – that is, the majority of your weekly runs. And in that way, it is a good alternative to, for example, Asics GEL-Nimbus. Compared to Asics GEL-Nimbus, it is a little lighter and it gives you a completely different feeling of speed, propulsion and easiness in your runs:

The shoe is exclusively made to run on harder surfaces. So, Asics Glideride is the running shoe for you who like to run on roads/asphalt or more established trail systems. The shoe is not suitable for trail runs, either to a greater or lesser degree. By using the shoe on undulating paths, or difficult terrains it will soon feel unstable underfoot.

It’s cushioned enough for long marathon distances and responsive enough for tempo training. A challenge for some runners may be the seam inside where the panel ends in the GlideRide top. Some runners are aware of that during running. the shoe’s center of mass is closer to the heel, so it’s easier to swing the foot forward. The rolling motion you feel in this shoe actually propels the foot forward for increased efficiency by reducing the forward movement.

Guidesole is the name of the ergonomically arched sole, as mentioned with its excellent shock absorption, provides a quick footing and reduces the fatigue in the leg muscles. You will therefore, use less energy when you run compared to a regular sole, and can thus run longer.

The shock absorption is a combination of GEL® and FlyteFoam ™ in the heel. In addition, the midfoot is closer to the heel, which means that the stiffer and rounded forefoot makes the run more efficient and less resource demanding.

The mesh upper is soft and breathable, while still being supportive. The upper part of the Asics GlideRide is somewhat similar in structure to the Flyknit upper part from Nike. However, without being quite as elastic. But the top is of course seamless, so you avoid inconvenience and the risk of blisters.

The shoe’s outsole is made of rubber called AHARPLUS. The purpose of this is probably to improve the durability and extend the life of the shoe. The outsole has really high wear resistance and does as it should. Special features that can be highlighted are precise that the sole is built on AHAR rubber, which is a durable type of rubber that supports the fact that the shoe is for hard surfaces.

A stable and extremely elastic material. At the top, FlyteFoam is added in its more common structure. it is a little stiffer and more stabilizing. In addition to the double FlyteFoam midsole, an extra gel pad has also been inserted in the heel, and it is these elements that also make the construction of the midsole seem very stable.

The softness and shock absorption in the Asics Glideride consists of the GEL placed in the heel and, of course, all the FlyteFoam used in the midsole. So, we get a “firmer” shock absorption than expected, but will also find that it fits the shoe and the concept.

Here we must be aware that there is plenty of space in the forefoot – as is often the case in Asics running shoes. There is plenty of room for your toes in the “box” and plenty of air. When we look at the shoe as a whole, it actually also makes good sense.

Here, Asics sticks more to the classic. And it’s not bad. Because if there is one shoe part Asics always has been good at, it is to create soft, supportive and comfortable heel parts. This is also the case in Asics Glideride. There is a stabilizing heel cap put on the outside of the shoe, and inside the shoe, there is plenty of softness and support for your heel / Achilles tendon.

The first and most natural basis would be to compare it to Asics Gel Nimbus. Because they are from the same brand, but they are also both neutral quantity training running shoes. The shoe can also be compared to Asics GT-2000? Because it is stable, even if it is launched as neutral.

If we take the unconventional construction as a starting point, we can also draw a parallel to the Hoka One One running shoes, at least in appearance. Another comparison is parallel to the Nike Zoom aircraft construction. There we also have this banana design with a different and steep angle on the forefoot – the propulsion-sole construction.

It is actually scientifically proven and documented for the shoe to save energy when running the long runs. ASICS Glideride can:

• Reduce the total energy loss at the ankle joint

• Reduce weight but maintain stability for good performance and protection

Asics Glideride is one of the indestructible tractors that just lasts for many kilometers. It is a running shoe for quantity training with the possibility of speed and propulsion, or longer competition races. It has high comfort and protection on the long easy runs (LSD).

So, it is good as e.g., shoe # 2 for the long LSD runs but is less suitable for interval training and they’re not designed to make you run faster. We could say that Asics GlideRide gets the job done whether you use them for long runs, daily trainer or recovery runs. 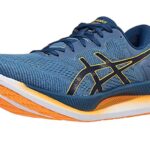 ALL TYPES OF LOVE: Quiet or loud. Inside and out p